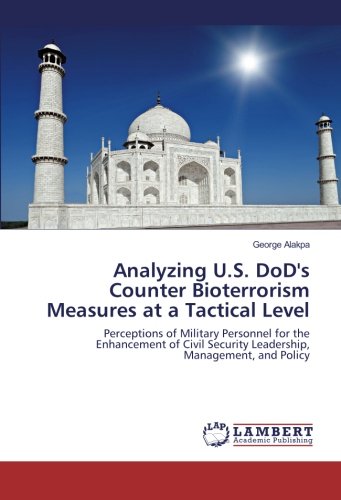 Analyzing U.S. DoD’s Counter Bioterrorism Measures at a Tactical Level: Perceptions of Military Personnel for the…

This was a doctoral research study conducted to determine (if any), what procedure(s) or counter bioterrorism measures exist from the U.S. Department of Defense to be employed at the entry control points of all combat bases’ perimeter; to detect, deter or destroy any terrorist with a bioagent. Since it was not possible to conduct this study in a combat outpost, the closest one can get, was to obtain information from military personnel that are in service and/or have being to combat via a survey instrument, that had to be developed from scratch and validated. It was not an easy task base on the sensitivity and classification of most military protocols, however, useful information was obtained that could be extrapolated and translated to the homeland’s port of entry security search procedures and training, that might assist with the overall preparedness and response to both natural or intentional/deliberate importation of bioagents into either a U.S. military combat post/base or the U.S. homeland. I do acknowledge some of the limitations that exist, however, it is a starting point for a meaningful discussion.