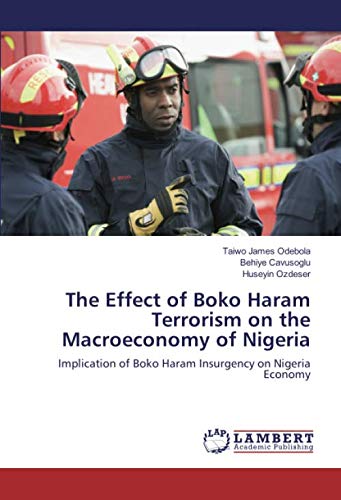 Boko Haram an insurgency attendant in the Nigerian nation state has been a problem to the macro-economy of the country affecting most important sectors and contributors to the growth of the economy of Nigeria. In the latest Global Terrorism Index, GTI 2018, Nigeria is still among the top five countries mostly affected by terrorism, a position which it has maintained since year 2014. This work seeks to evaluate, highlight and pinpoint the implication of the menace on the nation. As it is glaring that terrorism is a global vice infesting countries worldwide and many nations are suffering from its infliction. However, it seems from various studies, works and researches particularly from scholars, academics and researchers that most countries that are terrorism-infested seem to have the same economic characteristics. Consequently, as the terror gathers momentum there is need to confront it as it is staring the world in the face and many economies are acutely suffering from terrorism-infliction. This rising phenomenon that was once an emerging paradigm has to be curbed and curtailed, hence the reason for many works and studies on the topical issue, same as this to find lasting solution.

We use cookies on our website to give you the most relevant experience by remembering your preferences and repeat visits. By clicking “Accept All”, you consent to the use of ALL the cookies. However, you may visit "Cookie Settings" to provide a controlled consent.
Cookie SettingsAccept All
Manage consent

This website uses cookies to improve your experience while you navigate through the website. Out of these, the cookies that are categorized as necessary are stored on your browser as they are essential for the working of basic functionalities of the website. We also use third-party cookies that help us analyze and understand how you use this website. These cookies will be stored in your browser only with your consent. You also have the option to opt-out of these cookies. But opting out of some of these cookies may affect your browsing experience.
Necessary Siempre activado
Necessary cookies are absolutely essential for the website to function properly. These cookies ensure basic functionalities and security features of the website, anonymously.
Functional
Functional cookies help to perform certain functionalities like sharing the content of the website on social media platforms, collect feedbacks, and other third-party features.
Performance
Performance cookies are used to understand and analyze the key performance indexes of the website which helps in delivering a better user experience for the visitors.
Analytics
Analytical cookies are used to understand how visitors interact with the website. These cookies help provide information on metrics the number of visitors, bounce rate, traffic source, etc.
Advertisement
Advertisement cookies are used to provide visitors with relevant ads and marketing campaigns. These cookies track visitors across websites and collect information to provide customized ads.
Others
Other uncategorized cookies are those that are being analyzed and have not been classified into a category as yet.
GUARDAR Y ACEPTAR